How to create a Basic Cascade with DFP Small Business

Often requested of Google DoubleClick for Publishers (DFB) Small Business (SB) is the ability to create a cascade.

Unfortunately, DFP Small Business does not innately allow you to create a cascade.

DFP Small Business does all the micromanaging for you on determining what ad to show based on the settings you have done.

But it’s still possible to do a cascade by utilizing the way the system works.

Cascading Line Items is basically having one Line Item deliver until it finishes after which the next Line Item in line starts their run.

You can emulate this by utilizing the 4 things:

Please do note that this process is intended for use when there are no other non-cascading Line Items on the Ad Unit/Ad Placement being used.The basis premise of the process is this:

Overall, that’s how it works. Let’s get to the nitty gritty then, shall we?

For our scenario, we have 4 Tiers that should cascade. They are aptly named:

For a 4 Tiered Cascade, we need 4 Ad Units (and 4 Ad Placements, each Ad Placement will refer to one Ad Unit) and 7 or 8 Line Items.

Here are the Ad Units I created

Here is the first Tier of Line Items I created with the basic settings.

That’s how I have set up the Line Items for Tier One.

Tier 2, 3 and 4 follow the same exact settings. For the Line Item “Cascade Tier One Ad”, you would put your normal Creative here.

This is the ad you want to see in the first cascade. For the Line Item “Cascade Tier One
Waterfall”, instead of putting a Creative in there, you would put this:

The above code uses Javascript to print out the DFP code for the next Ad Unit:
Cascade_2_300x250.

Which causes DFP to load the Ad for this Unit (“Cascade Tier Two Ad”).

When “Cascade Tier Two Ad” finishes its run, the House Line item “Cascade Tier Two
Waterfall” would happen and would have a code similar to above but would cause it to
print out the DFP code for the 3rd Tier “Cascade_3_300x250”. 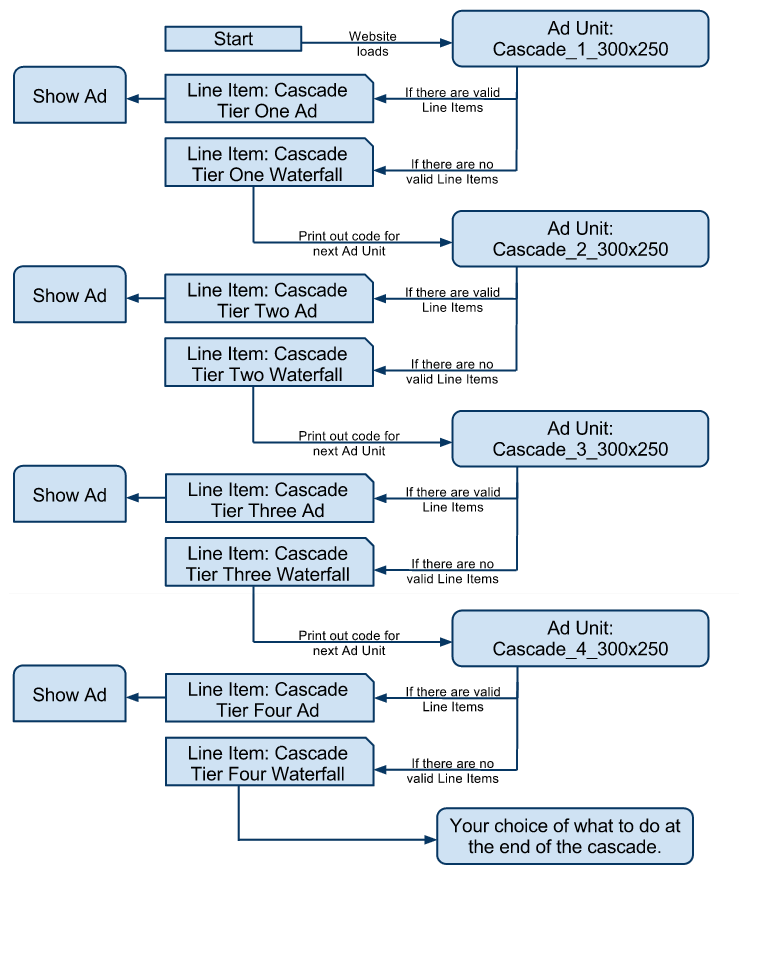 When it gets the “Cascade Tier Four Waterfall”, the last House Line Item, you may wish
to have it load another Ad Unit (your standard website Ad Unit, for example) so that
there is something there.

Or put a regular House ad in that Line Item.

You are reading: How to create a Basic Cascade with DFP Small Business